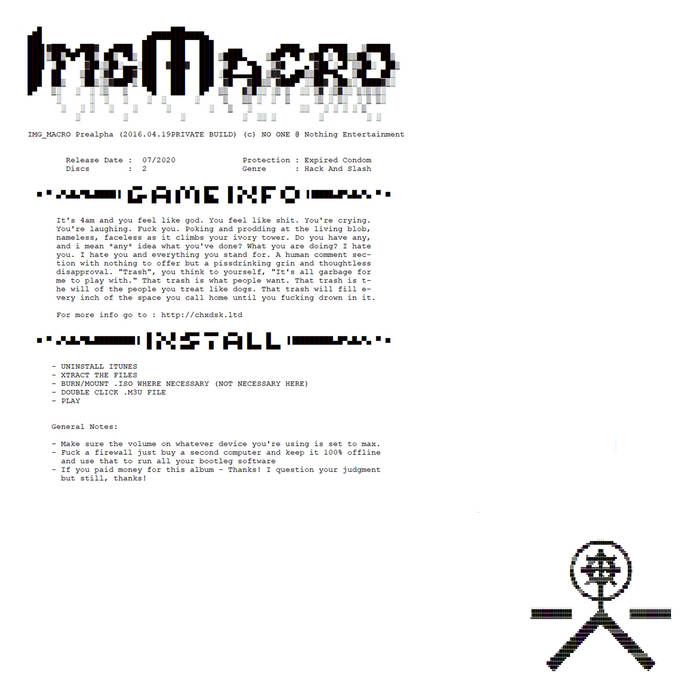 kernage This was the moment I was waiting for

What started off last year as an attempt to write a fitting "final chapter" for the Dicksoak alias wound up evolving into the first official release as CHKDSK -- imgmacro is a 34 minute mashup album that just kinda. exists. i just want it to be funny and sound good and entertain people. I could sit here and tell you about how the album is supposed to function as an abstract emotional painting summarizing the past 8 years of my life artistically and emotionally, about all these cool intricate little details about the work that make it tie back into itself and into many other works. But that wouldn't be any fun, now would it? those little breadcrumb trails are for you to find on your own :)

as is expected with any release this heavily indebted to so many uncleared samples, and since this is technically a beta test version of half an album i've been hyping up for 2+ years, it is and will always be free to download. Any money I get from this is just a nice pleasant surprise. Please feel free to take, sample, re-sample, re-mix, and re-mangle any of the ideas or songs you see here. Plunderphonics now and forever and ever amen (break)

(aka dicksoak, etc)
i will literally not stop accelerating my body's own evolution until my mind has advanced to a point where it's capable of developing technology that allows me to go back in time to when the only thing fun you could do with a computer was scream at a slavic teenager who barely speaks english on a ps2 romhack forum because he said haruhi was a shit waifu ... more